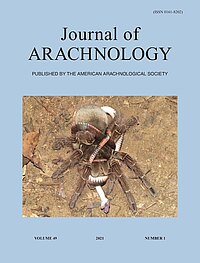 In this paper, 319 incidents of snake predation by spiders are reported based on a comprehensive global literature and social media survey. Snake-catching spiders have been documented from all continents except Antarctica. Snake predation by spiders has been most frequently documented in USA (51% of all incidents) and Australia (29%). The captured snakes are predominantly small-sized with an average body length of 25.9 6 1.3 cm (median 1⁄4 27 cm; range: 5.8–100 cm). Altogether .90 snake species from seven families have been documented to be captured by .40 spider species from 11 families. About 60% of the reported incidents were attributable to theridiids (’0.6–1.1 cm body length), a spider family that uses strong tangle webs for prey capture. Especially the Australian redback spider (Latrodectus hasselti Thorell, 1870), the African button spider (Latrodectus indistinctus O. Pickard-Cambridge, 1904), an Israeli widow spider (Latrodectus revivensis Shulov, 1948), and four species of North American widow spiders (Latrodectus geometricus C.L. Koch, 1841, Latrodectus hesperus Chamberlin & Ivie, 1935, Latrodectus mactans (Fabricius, 1775), and Latrodectus variolus Walckenaer, 1837) – equipped with a very potent vertebrate-specific toxin (a- latrotoxin) – have proven to be expert snake catchers. The use of vertebrates as a supplementary food source by spiders represents an opportunity to enlarge their food base, resulting in enhanced survival capability. Interestingly, the snakes captured by spiders also encompasses some species from the families Elapidae and Viperidae known to be highly toxic to humans and other vertebrates. Not only do spiders sometimes capture and kill snakes, quite often the tables are turned – that is, a larger number of arthropod-eating snake species (in particular nonvenomous species in the family Colubridae) include spiders in their diets.

The Crato Formation (Lower Cretaceous) of Brazil is well known for an exceptionally preserved terrestrial arthropod fossil assemblage. Spiders are relatively abundant, but few have been formally described. A fossil spider belonging to the family Palpimanidae, araneophageous ground-dwelling spiders with distinctly robust front legs, is preserved with the dorsal side hidden within the rock matrix. For the first time, micro-computed tomography (micro-CT) was used to image a fossil spider preserved in a rock matrix, to reveal the dorsal side of this specimen, revealing the eye arrangement, a useful taxonomic character in most spiders, and a deflated abdomen, likely the result of taphonomic processes. The specimen possesses other distinguishing characteristics of Palpimanidae, including an inflated first leg femur, a heavily sclerotized scutum, and a reduced number of spinnerets (2) surrounded by a sclerotized ring. The spider has eight eyes with the lateral pairs extremely close together, a trait suggestive of the subfamily Chediminae. The specimen also possesses an unusual first leg patella with a retrolateral excavation and a thorn-like projection. A new genus is erected, and the spider is named Cretapalpus vittari gen. et sp. nov. A phylogenetic analysis including extant species from each of the subfamilies within Palpimanidae places the fossil at the base of Chediminae þ Otiothopinae. This is the earliest reported fossil palpimanid and first chedimine from South America. A fossil chedimine in South America is not surprising because the South American and African plates were still relatively close during the Early Cretaceous.

Evidence of piercing and sexual differences in venom composition in a sexual stinging scorpion (Scorpiones: Euscorpiidae)

The males of the Mexican species Megacormus gertschi D ́ıaz-Najera, 1966 (Scorpiones: Euscorpiidae: Megacorminae) sting the female repeatedly in the pedipalp tibia-patella intersegmental membrane (TPIM) during the initiation of the promenade a deux. It has been suggested that the male’s venom introduced during this ‘‘sexual sting’’ behavior could generate some sedative effect and reduce the possibility of being cannibalized by the female. However, this is unsupported by evidence regarding venom transference. Here, we provide evidence of perforation of the TPIM by the male aculeus and venom transfer during sexual sting performance. We also provide the first venom characterization of this species and show that it has a sexually dimorphic composition. These results, in combination with observations that the sexual sting is displayed in successful matings with non-defensive females, lead us to consider the pre-insemination sexual stinging as a non-genitalic sexual interaction with a potential role as a courtship element.

Propositions of homology are fundamental in systematics, since they provide the basis for supporting clades. Consequently, such phylogenetic propositions rely on correct character and character state definitions. Although male genital morphology is a key source of information for understanding the phylogeny and classification of the Withiidae (Pseudoscorpiones), they have only been subjected to examination in six of the 170 species of the family. The suprageneric classification of the Withiidae is unstable, as subfamilies and tribes are not well supported by morphological characters, and only the unranked group of genera Cacodemoniini is currently accepted. The aim of the present work is to characterize the male genital armature of the Cacodemoniini and propose homology statements for these structures based upon their morphological correspondence. Through direct examination and literature review of 12 of the 13 genera of the Cacodemoniini, we provide the first structural correspondence statements and descriptions of variation for the dorsal apodemes, the ejaculatory canal, the lateral apodemes, and the lateral rods; we also conclude that unlike other pseudoscorpions, the Cacodemoniini have paired, independent lateral rods and a long ejaculatory canal formed not by the dorsal apodemes exclusively, but by a fusion of the dorsal and the lateral apodemes. The proposed interpretations lay the groundwork for phylogenetic testing of homologies and may allow a better understanding of the formation of the spermatophore, given that it is molded by the genital armature.

The Neopilionidae is a highly diversified harvestman family in New Zealand, comprising eight genera and 28 species. Although individuals of many species are abundant in the field, basic information on their natural history is absent. Here we describe the diet, predators, and defensive behaviors of 13 species across three genera, Forsteropsalis Taylor, 2013, Mangatangi Taylor, 2013, and Pantopsalis Simon, 1879. Using three years of field observations, we first identify food items for this family, finding that New Zealand neopilionids are opportunistic, generalist foragers with a diet composed of a wide variety of prey and scavenged soft-bodied invertebrates, including worms, amphipods, species from nine orders of insects, and two orders of arachnids (including conspecifics). We then describe the first known invertebrate predators of New Zealand harvestmen, including seven spider species, and conduct a review of the literature to collate a list of 32 species of native and non-native vertebrates (frogs, lizards, fish, birds, and mammals) that prey on harvestmen, including neopilionids. Finally, we describe the defensive behaviors of neopilionids, providing the first reports of autotomy and thanatosis in the family. In general, the diet of New Zealand neopilionids is similar to other harvestman species, and the list of predators includes mostly insectivorous taxa known to feed on harvestmen elsewhere. The defensive repertoire of neopilionids includes behaviors recorded for other species of Eupnoi, such as leg autotomy, but also unique behaviors that are only known for species of Dyspnoi and Laniatores, such as thanatosis.

Spider webs are characteristic of a species, yet web architecture, the amount of silk laid, and silk mechanics are plastic at an individual level. These different web parameters are influenced by the spiders’ own intrinsic state as well as biotic and abiotic conditions. When compared to satiated spiders, hungry spiders are known to build bigger webs, alter the mesh width of the web or increase the frequency of web-building. Although the influence of hunger on web architecture is known in solitary spiders, it has not been studied in social spiders. Here, we examine how prey availability affects the amount of web and cribellate silk laid in the social spider Stegodyphus sarasinorum, Karsch, 1892 (Eresidae). In a laboratory setup, we observed that unfed spiders invest more in web-building, compared to fed spiders. Unfed social spider colonies laid more silk, particularly cribellate silk, than fed colonies. Our results help to shed light on the plasticity of web architecture in social spiders with respect to changes in prey availability.

In this study, we report a new interaction of the wasp Zatypota riverai Gauld, 1991 (Ichneumonidae) parasitizing the spider Cyclosa fililineata Hingston, 1932 (Araneidae) and we describe the modified spider web. Our results show that parasitized spiders build modified webs that are clearly different from normal capture webs. This modified web presents several additional lines at the center of the web, forming a disk-like structure that was also observed in modified webs of other host orb-weaving spiders. To our knowledge, Z. riverai (this study) and Z. kauros Gauld, 1984 are the only two species of the genus Zatypota that use spiders from different families as host. However, the unexpected host C. fililineata could be an accidental host, since in the same region there are two of the typical hosts, the theridiid spiders Anelosimus baeza Agnarsson, 2006 and Theridion sp.

We report observations over several field seasons of egg and juvenile guarding by males of a Central American species of cosmetid harvestman (Opiliones: Cosmetidae), Cynorta bromeliacia Goodnight & Goodnight, 1947. This represents only the second species of the family Cosmetidae that has been reported to exhibit paternal care. Importantly, we observed multiple instances of solitary male egg-guarding, including examples where eggs and young were at different stages of development. We also observed a few cases of mate guarding by a male at an oviposition site, where the female was near to eggs that appeared to have been recently laid. We discuss these observations in relation to the arboreal tendency of this species and speculate that oviposition sites are close to roosting sites or other such refuges for either the male or both sexes. Given the weak sexual dimorphism displayed by the species, we discuss that the externally visible characters we used to identify males are unlikely to provide any advantage in fighting off conspecific males. We also suspect that females may produce multiple clutches in this species, but this remains to be verified. Finally, we discuss how our findings at the end of the wet season may relate to the local microclimate and suggest further standardized observations throughout the year are required.